Virtual race previews for each grade at the 2019 DCXC Invitational, which breaks up the high school divisions by each grade level. All race finishes will be LIVE streamed on MileSplit.com HERE. Two state champion caliber runners will clash in this one in Virginia Episcopal's Daniel O'Brien and Washington Latin's Luke Tewalt. The Virginia private school state champion O'Brien won last year's junior race at DCXC in 16:07 and earned Foot Locker All-American honors at season's end with a 12th place finish in San Diego. O'Brien has a speedy 5K PR of 15:07 and has run 9:10 for 3200 meters and 4:14 for 1600 meters on the track.

DC's top distance runner in Tewalt was a runner-up to O'Brien by 17 seconds in last year's DCXC Invite junior race in 16:24. He went onto win the DCSAA state title at the same venue but different course at Kenilworth Park, while Tewalt ran 4:20 for mile and 9:20 for two miles on the track.

The Gonzaga duo of Gavin McElhennon and Cullen Capuano should also both vie for top 3 finishes in the senior race.

Montgomery Blair, Oakton, and Walter Johnson have among the top group of seniors in the meet. Walter Johnson's Jenna Goldberg has saved her best for last with best running coming as a senior in cross country as shown with a strong 4th place finish in the loaded Oatlands Invitational on a hilly 5K course running a PR of 18:25. On a flat and faster 5K course at Kenilworth Park, Goldberg could press for a sub 18 minute time in the senior race and vastly improve from her 20:20 third place effort in last year's junior race at DCXC.

Top competition for Goldberg include defending DCSAA state champ Ava Nicely and her Woodrow Wilson (DC) teammate Claire Wigglesworth. The only other runner in the field to have gone sub 19 minutes like Goldberg in cross country is  George C. Marshall's Sophie Tedesco with a 18:36 5K best. Another talent to watch who really shined on the track this past spring is Francesca Cetta of Holton Arms. Cetta ran a 2:16 800 and 5:00 1600 this past spring and started her cross country season with a 19:09 5K run.

Walt Whitman girls have 5 seniors who have broken 21 minutes for 5K in the past to make them the team favorites followed by McLean, Woodrow Wilson, and George C. Marshall as next challenging squads. The Oakton boys could really clean up this race up front with four of the top five fastest runners in the field. Arnav Tikhe (15:53 5K PR), Zachary Morse (16:01), Garrett Woodhouse (16:05), and Bryce Buttrey (16:18) could make it a team workout up front after running fast times in recent weekends at adidas XC Challenge and Knights Crossing Invitational.

Gonzaga College's Patrick Donnelly was a runner-up in last year's sophomore race and might be the best runner to break up the group of Oakton runners with a 16:11 5K best. Montgomery Blair's Joel Simpson won the Hood College Invite two weekends ago in 16:26 and should be in the mix as well with leaders at DCXC.

Oakton will be heavy favorites to win the junior boys with their slew of front runners, while next best squads Grafton, Winston Churchill, and McLean should battle it out for second place in the team standings. 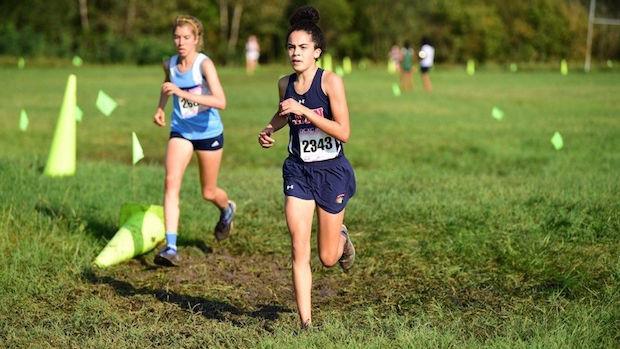 Plenty of quality runners in the junior girls race field with many of the top finishers back from last year's sophomore race led by 2018 DCXC Invite winner Zoe Edelman of Washington Latin. Edelman has won several DCSAA titles in track and ran a 17:47 5K on the track this past spring.

Top competition for Edelman and stopping her potentially from winning a second straight time at DCXC will be last year's sophomore race runner-up Piper Dean of Yorktown and Maryland All-State runner Ella Gaul of Walter Johnson. Dean was the Virginia 6A outdoor state champion in the 3200 running a 10:58 best and has broken 19 minutes for 5K. Gaul was fifth in last year's sophomore race and recently ran a 19:24 5K PR.

Bethesda-Chevy Chase, Oakton, St. John's College, and Walter Johnson will be among top contending teams in the junior girls division. After top 10 finishes in upperclassmen dominated varsity fields at Great Meadow, Monroe Parker, and Oatklands Invitational, Bishop O'Connell junior Yakob Kelley could enjoy his first win of the season racing against only peers from the class of 2022 at DCXC. Kelley ran 16:31 for 5K at Great Meadow followed by another solid time on a hillier course at Oatlands in 16:35. He's a transfer from New York who ran 9:51 for 3200 meters last spring, so this will be his first time racing at DCXC.

Grafton's Ben Madrigral is the only other sophomore in the meet who has broken 17 minutes for 5K and finished 25 seconds behind Kelley racing head to head but in a larger field of runners from other grades at Oatlands in a top 25 finish at 17 minutes flat.

Winston Churchill, Grafton, Walt Whitman, and McLean among the schools in contention for team title in the sophomore boys division. Bishop O'Connell's Katherine Slovak returns after winning last year's freshmen race in 20:41. She started her season with a solid top 15 finish and 5K PR of 20:13 at the Great Meadow Invite. Slovak was the WCAC runner-up last fall and a top 5 finisher in the Virginia private schools state meet in 2018. Could be a possible sweep of the sophomore races for the O'Connell program between Slovak and Kelley.

Title of fastest competitor in the field based on 5K times alone belongs to Georgetown Visitation's Lilli Grant with a 19:55 best in her first cross country race a few weeks ago. She came out during the track season to run solid times of 5:15 for 1600 meters and 11:39 for 3200 meters.

Roughly a dozen more girls who have ventured well into the 20 minute range and possibly looking for their first sub 20 minute race at DCXC in the sophomore girls race.

McLean, Walter Johnson, George Marshall, and Oakton all had a strong addition of freshmen runners last fall who look to make an impact collectively together as a sophomores on Saturday.

Freshmen boys race could be a two man race between Oakton's Tyler Coleman with a 17:27 5K PR and Northwest's Gage Osborne with a 17:47 5K PR as the only two ninth graders in the meet who have broken 18 minutes for 5K. Osborne is younger brother of Chase Osborne ('18), a recently graduated standout middle distance runner for Northwest who ran 1:53 for 800 meters in high school.

Oakton has a deep group of freshmen followed by Hempfield Area (PA), Winston Churchill, and Walter Johnson at DCXC. The freshmen girls have two rising stars who will be making names for themselves for next few year's in St. John's College's Meredith Gotzman and McLean's Anna Wells. Gotzman made quite an impression winning the Landon Invitational last weekend with a swift 5K time of 18:58. Meanwhile, Wells won the varsity B race at Oatlands two weeks ago with a 20:29 performance on the hilly course.

Wells also looks to potentially lead the McLean girls to a team win in the freshmen division.