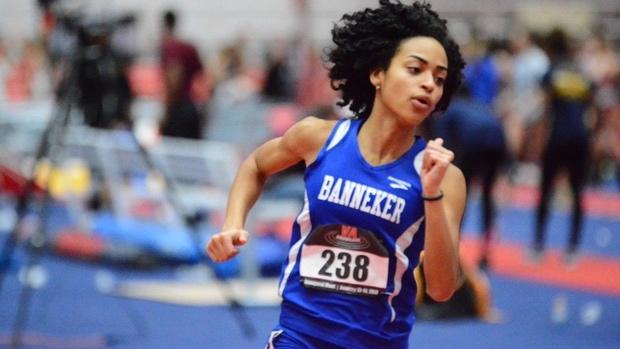 Dasia Bando is used to flying in the air as part of the Washington Banneker (DC) High cheerleading team.

Now the senior has made a name for herself on land, too, darting on the track at explosive speeds.

What's eluded her, however, has been a state title.

And on Wednesday, at the District of Columbia Interscholastic Athletic Association (DCIAA) Middle School/High School championships at Prince George's Sports & Learning Complex, she'll get her chance.

Bando is competing in the 55m, 55m hurdles and 300m run. A season ago, she finished fifth, sixth and seventh, respectively, in the events.

But she says there's a very easy explanation for that.

"Well, last year it was my first year coming back to track after being out of it for two years," she said.

Since then, Bando has been a quick study who has set high expectations.

"She's trying to break some personal records at the (public) state championships as far as the 55m and 300m goes, because she's been training hard," Banneker boys coach Chris Verner said. 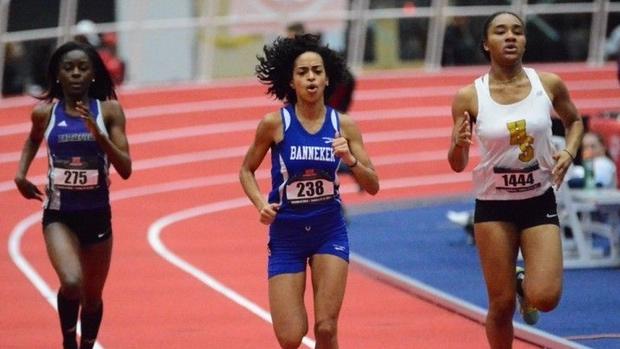 By doing so, she could likely spread her wings even further, competing against athletes beyond the DC metro area.

"Lately I've been trying to prove myself at meets outside the region," said Bando, who finished second in both of her heats in the non-invitational 300m and 500m runs at the VA Showcase.

It's been an adjustment transitioning from cheerleading, where the diminutive sprinter was a flyer with the competitive team.

But Bando said there are helpful comparisons between the two.

"Cheering helps me with hurdles," she said. "It's helped me not be scared with the hurdles or the high jump. Because I'm constantly in the air as a flyer, it motivates me in track and helps me take risks."

Her coaches think she's ready for a breakthrough as well.

"It looks like she's headed in that direction," Verner said. "She's definitely excited about going to the state meet."

Bando may see the biggest jump in the hurdles, where she's improving every day at training.

"She's worked out some kinks at the top of this year," Verner said. "She's doing better with relaxing before races. She's not overthinking it or being anxious."

In due time, Bando may even have a chance to compare herself against some of the best competition in DC.

In two weeks, the District of Columbia State Athletic Association meet comes back to Prince George for a competition between public, private and charter schools in the DC area.

"I'll get to see some friendly competition," Bando said.

To connect with Milesplit Content Producer Cory Mull, follow him on Twitter @bycorymull. Have a story idea? We're all about those. Email him at cory.mull@flosports.tv. To have access to year-round stats, breaking news, stories and videos, register for Milesplit DC here.
More on DC MileSplit: Behind Alonzo Ruffin, St. John's College Girls Are Breaking Through Nationally
Girls 55 Finals Section 1 - Dasia Bando (Banneker) 7.18 DCSAA Indoor Championships Feb 14, 2017
Tweets by