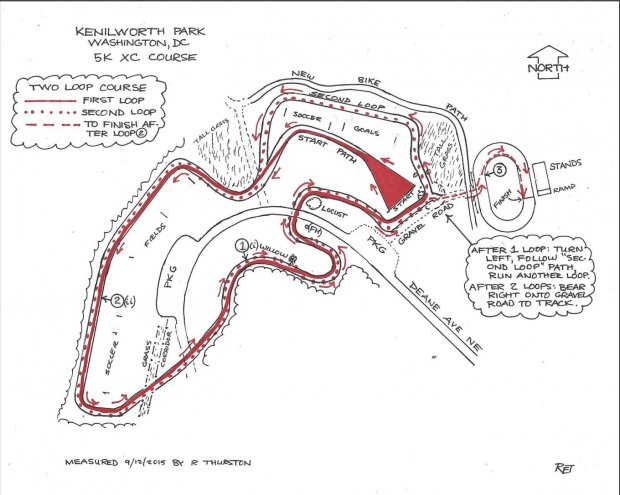 I. General Information
A. Track and Field and Cross Country NFHS rules will apply to the DCSAA Championship Meet unless otherwise noted.
B. Schools choosing to enter the DCSAA Championship Cross Country Meet have the responsibility for reading and adhering to the rules and regulations of this bulletin.
C. Eligibility rules for all participants can be found in 5 DCMR A; Chapter 27 at DCSAAsports.org.
D. A CONTESTANT, in order to qualify must be on the active Cross Country roster of the school team by October 24, 2016, must have participated in a minimum of one Cross Country meet with the schools team.
E. A TEAM, in order to qualify, must have officially participated in at least one regular season race.
F. Rosters of participating student athletes need to be submitted to DCSAA office (Kenneth.owens@dc.gov) no later than Tuesday, November 1st.

II. State Meet
A. Meet Organization
1. The 2016 DCSAA Cross Country Championship meet will be held at Kenilworth Park on November 5th. This year we will also include a JV race prior to the start of the state championship races.
2. The Games Committee, comprised of members of the State Cross Country Committee present at the meet, will rule on any questions and protest that arise. Meet officials will be provided to handle finish chute, see that the athletes start and finish properly, and see that the meet is run according to National Federation rules.
3. Athletes should come dressed for participation.
4. A maximum of seven student-athletes from a school will be permitted to participate in the varsity races.
5. There will not be a maximum number of student-athletes from a school for the JV race.
6. A school may run fewer than five (5) student athletes, but a school must finish at least five (5) to be considered for the team title.
7. On arrival to the course, the coach or school representative should report to the registration table for the teams packet which will contain numbers and course maps.
8. Tentative schedule:
9:30 am Walk of course
10:15 am Meeting for officials
10:30 am Coaches Meeting
11:00 am Girls JV Race
11:35 am Boys JV Race
12:10 pm Girls State Championship
12:45 pm Boys State Championship
1:30 pm Awards

1. It is the coachs responsibility to instruct the competitors concerning the official markings.
2. Athletes are responsible for walking the course before the race.
3. Only participants and credentialed attendants are allowed in the starting area.
4. Any coach observed running with their student athletes will disqualify their team from the race.
5. Any runner will have a maximum of 30 minutes to complete the race before the course is cleared for the next race.
6. Upon the start of the race, coaches MAY NOT move closer to the finish line. The finish line is a restricted area for race participants and officials only

C. Scoring
1. Scoring shall be as shown on the following table:
Place: First Second Third Fourth Sixth etc. Points: 1 2 3 4 6 etc.
2. All competitors who finish the race shall be ranked and tallied in accordance with the above table. Seven team members retain the order of finish. The team score then shall be determined by totaling the points scores by the first five finishers of each team. The team which scores the fewest number of points is the winner.
3. If fewer than five competitors of a team finish, the places of all members of the team shall be disregarded and the team scores re-ranked.
4. Ties in team scoring shall be resolved by comparing the sixth-place finishers from the tying teams. The team with the best sixth place finisher shall prevail.
5. If only five competitors of tying teams finish, the tie shall be resolve by totaling the scores of the first four finishers.
6. Top 15 varsity runners will receive medals and the top two teams will receive a trophy. Top 10 JV runners will receive medals.

D. Start / Conclusion
1. The start of the race begins when competitors uniforms are checked and they are called to the starting line for final instructions and is considered to be official and concluded when places have been determined and the results have been recorded.
2. A competitor finishes the race when the torso of the runner breaks the plain of the finish line.

E. First Aid/ Medical
1. Certified Athletic Trainers will be at the event to assists with any medical emergencies.

To get the full depth of our meet coverage, become PRO!